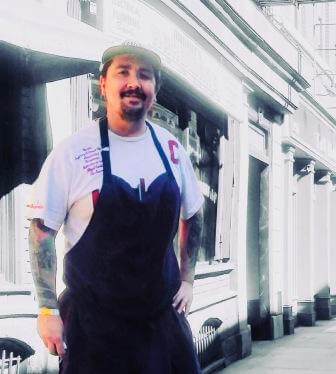 Chef Cody Langsam has always loved the culinary arts, a talent he inherited from his grandmother, who already succeeded in the restaurant business. While Chef Cody initially went to college for business, he quickly decided that he had to pursue what he was naturally gifted at. So armed with determination and passion, he went on and enrolled at the Art Institute Los Angeles – School of Culinary Arts.

After Chef Cody graduated with a degree in culinary arts, his life was about to change forever. He met his 1st mentor, Chef Phillip Frankland Lee of “Scratch Bar” Restaurants where he would eventually end up his sous chef at “The Gaderene Swine”, Lee’s vegan spot where he and his team were awarded the “73rd best” restaurant in L.A. by Los Angeles Times beloved food critic Jonathan Gold on his “101 Best List” as well as receiving the #1 vegan restaurant in the country by Open Table and Yelp.

He credits his second mentor Chef Brad Miller of “Ox and Son” in Santa Monica and the “Inn of the Seventh Ray” (Chef Cody ended up the Head Chef for 5 years)for the guidance he provided and technical training that had a lot to do with making him the success he is today. Chef Cody has also had the honor of cooking for such wonderful events such as “No KId Hungry” and “The American Liver Foundation”.

After training in fine dining for years honing his skills, he eventually moved to production catering for film and TV where he wound up leading his catering team for productions such as ” Always Sunny in Philadelphia”, “Curb your Enthusiasm” and various Netflix Productions just to name a few.

These days chef Cody is bringing his years of culinary experience, technique, and talent to focusing on private chef  work for everyone from private homes and  families to celebrities and artist and high end clientele all over Los Angeles.

He currently lives in Topanga, CA with his wife and two children and spends most of his days cooking what he loves and telling dad jokes.