Saquaa Cunningham, 2020 Young Chef Candidate for Chef of the year in the National Black Chef’s Association. She was nominated and selected amongst a great selection of young Chefs by the President of the NBCA to serve as his secretary, which plays a major role in decision making for the organization and its daily operations.

At the age of 23, Saquãa trained as the Executive Chef of Atlanta’s popular seafood and soul food restaurant known as Dipped N’ Butter. She has also worked for popular restaurants. One in particular being known as Pappadeaux Seafood Kitchen which originated out of Houston, TX.

Saquãa started cooking at the age of 6, carrying her love of cooking through several culinary programs throughout her lifetime before deciding to start her own catering company in 2019. Since then she has become a private chef, catering to the needs of various party sizes. Whether large, small, intimate, ect. There isn’t a task she can’t accomplish with her skills.

To add to her many credentials in the last year, Saquãa has grown and found her home in the Culinary world, acquiring two Master Chef Mentors who help guide, shape, and grow her skills on a daily basis. She has had the pleasure of working alongside some amazing Master Chefs for large events such as Euphoria Food and Wine Festival, University Tailgates, Zoagies Food Truck, and large weddings serving over 400 guests.

Saquãa has had the pleasure of cooking for familiar names such as Tony Gaskins, T.I. and Tiny Harris, Coi Leray, and many organizations on a Regional, District, State, and County scale.

“It’s YOUR world, I’m just cooking in it” 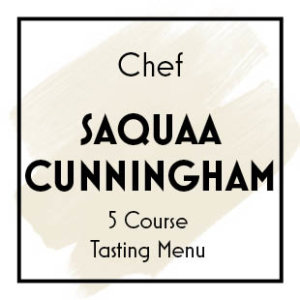